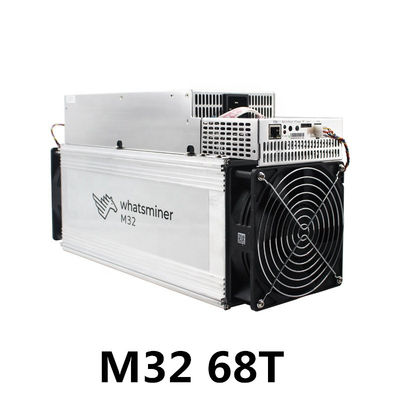 MicroBT WhatsMiner M32-68T Review
The MicroBT WhatsMiner M32-68T is an SHA-256 mining device that can mine Bitcoin with a hash rate of 62Th and power consumption of 3348W. This device was produced by the MicroBT company and had an efficiency of 0.054j/Gh. It has a noise level of 75db and comes in a dimension 230 x 350 x 490mm. The device comes with two fans that help to keep the device's temperature at optimum conditions. The device performs efficiently at the temperature range of 0 - 45 degrees celsius. Also, the humidity range at which the device performs well is 5 - 95%.

help in dissipating heat from the device. When the mining device is in operation, the fans help reduce heat and prolong the mining activity.

Other mineable coins
The MicroBT WhatsMiner M32-68T mines Bitcoin using the SHA-256 algorithm. It is also able to mine other coins. Some of the other mineable coins are, Acoin (Acoin), Curecoin, Joulecoin(XJO), Unbreakable(UNB), Peercoin(PPC), Bitcoin cash(BCH), eMark(DEM).

Chengdu Chenxiyu Technology Co., Ltd. is one of the earliest professional platforms for selling bitcoin mining machines in China. It is committed to continuously delivering value to the entire industry chain of digital currency mining. The company gathers consulting resources, hardware products, circle forums, technical services, and includes industries. The most vertical information information, the main professional mining machine sales, recycling, mine custody, hardware and peripheral product sales and technical services. Our company has reached cooperation with leading mining machine manufacturers and mining pools such as Bitmain, Jianan Zhizhi, Yibang, f2pool, Antpool, Biyin, Spider Mine Pool, etc. There is no need to wait for the mine position, the lowest price on the whole network, and the spot is available at any time Excavation.