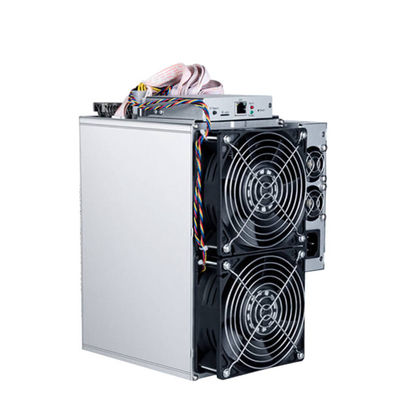 In recent years, the price of bitcoin has continued to decline, but the computing power has increased significantly. No matter what the willingness behind it is, this environment has brought great pressure to bitcoin miners.
In order to reduce the proportion of electricity expenditure, persistent miners have turned their attention to a new generation of 28nm process mining machines. Today, we want to evaluate the 28nm fourth generation miner from Avalon``
Our Avalon 4 is strictly an engineering prototype, so all test results are for reference only.
The size of the miner body is 395 mm x 160 mm x 165 mm, which is about one-third of the size of the standard ATX chassis. The net weight is 8.5Kg. The weight is mainly derived from aluminum fins.
The mining machine adopts honeycomb air inlet and outlet, which can not only ensure the smooth flow of air, but also obtain better electromagnetic shielding effect. There are also power interface, data line interface and LED indicator at the air inlet.
The diameter of the cooling fan is 12cm, which is manufactured by Nippon Power Co., Ltd. we will test the noise level of this fan later.
There are two force calculation boards in the mining machine, a total of 40 a3222 force calculation chips, and the nominal force of a single chip is 25g, a total of 1t. It was troublesome to dismantle the machine, so we only dismantled the fan and the controller of the miner. This controller was developed by Avalon and put online as an open source, which was adopted by many mining machine manufacturers.
There is not much to be picky about the hardware design of this miner. Next, we will enter the installation and configuration stage.
The installation is very simple. Because the interfaces are different, there is basically no possibility of wrong insertion. The only thing to note is that the four 8-pin power supply interfaces on the miner are also compatible with the 6-pin power supply interface. Power supply we use the Great Wall Julong 1250W gold medal power supply, with a conversion efficiency of more than 90%. After installation, power on and prepare to start configuration.
Avalon officially provides a mining system modified based on openwrt and sets a static IP, which belongs to a relatively less common network segment, so we need to set it first.
Open the setting interface of the router through the browser, find a place similar to "Intranet IP configuration" or "LAN port IP configuration", modify the IP address to 192.168.0.1, save it, and the router will prompt to restart. After restarting, you can generally find the raspberry pie in the router interface. Here we can see that the IP address of raspberry pie is 192.168.0.100. We can access this IP address through the browser to enter the management interface of the mining system on raspberry pie. If you want to change the router's intranet IP address back to the original, you need to change XXX to DHCP, and then go to the router to change the intranet IP address back to the original.
Back to the mining system management interface, we can see some basic information of the mining machine and modify the mining configuration of the mining machine, which can basically meet the needs of ordinary users.
However, in order to facilitate the test and observation, I decided to use version 4.9 of cgminer, that is, the latest version, for the test. The system is an old friend arch Linux. We have already made a complete introduction to the installation of arch Linux and cgminer in the previous video on evaluating Avalon nano, which will not be repeated here( Video here, using Pacman - SYU)
First run through the official default settings. Here we can see that there are three values in the default frequency. It is said that it can be used to stabilize computing power and optimize power consumption. The initial value of the voltage is 0.8125v, but in the test, we found that the system will automatically adjust the voltage value to reduce power consumption. In our test, about 30 minutes after mining, the voltage automatically decreased to 0.7625v, and the power decreased to about 585w. During this period, the calculation force fluctuates up and down at 915g. At this time, the energy consumption ratio is 0.64w/g.
It is gratifying that the miner power at this time is much lower than the nominal power, but the calculation performance is not very satisfactory, although it has reached the official nominal standard of 10% fluctuation of 1t. So we decided to try overclocking.
After many tests, the parameters of frequency 495:435:420 and voltage 0.825v are matched, and satisfactory results are obtained. After stabilization, the voltage automatically drops to 0.7875. At this time, the computing power reaches 1.03t, and the power consumption is 693w, which is close to the official 700W. At the same time, the average computing power also slightly exceeds 1t.
In order to understand the over frequency reduction potential of this miner, we also looked at the lowest voltage that the machine can accept. At this time, the chip frequency has been set at the lowest 100m, and the voltage is as low as 0.5875v. Of course, this result does not make much sense, because the power consumption is 60W, and the computing power is only equivalent to an Avalon nano toy miner.
In terms of noise, this generation of Avalon mining machines performs very well. When the official default parameters are used, the noise value measured close to the fan is 55 dB, while the noise value measured by hand-held instruments and mining machines placed one meter away is 38 dB. What are these two noise values? We found such a set of data on the Internet: 1. 40 decibels at night in suburban residential areas; 2. 50 decibels in quiet offices; 3. 60 decibels of people's usual speech (rolling out)
In other words, if the machine is properly set (including frequency, voltage, target temperature, etc.), it can be used in the home or office.
Tag: