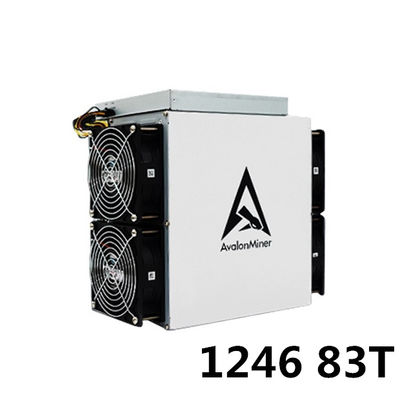 According to the official data of Jianan technology, Avalon a1246 inherits the classic universal hardware design of the previous generation products (a11 Series), and makes special optimization for the actual deployment environment of the mine: the power supply is integrated in the chassis, supports vertical or flat deployment, and can flexibly adapt to different shelves; The force calculation board is fixed with the box wall by the pull-out track, which is convenient for rapid maintenance or replacement of the force calculation board during mine operation and maintenance. In addition, the fan module is also equipped with a temperature sensor, which is directly connected with the main control chip and can adjust the fan speed in real time according to the temperature of the force calculation board.

Human computer interaction experience also ushered in a significant upgrade. Thanks to the greatly optimized original mine management system, Avalon a1246 can dynamically adapt to the changes of mine environment, ensure the stable operation of mining machines and reduce the impact on the site power grid. At the same time, the new web management background can monitor the status of mining machines at any time, support visual human-computer interaction, automatically remind of abnormal operation, actively shut down in case of sudden faults that seriously affect computing power, and reduce unnecessary power expenditure.

In terms of security, Avalon a1246 is equipped with new firmware, strengthens the original tamper proof mechanism, and has built-in AI chip k210 in the main control board of the machine. It analyzes the fluctuation of computing power through intelligent algorithm, adjusts the fan speed, identifies potential network attacks and vulnerabilities, stabilizes the computing power in a reliable range, and prevents the loss of computing power.
As the first model of Avalon A12 series, Avalon a1246 has a computing power of 90t, successfully ranking among the current high computing power models. In addition, Avalon a1246 also lowers the energy efficiency ratio to 38t / J, which is one of the few machines on the market with an energy efficiency ratio below 40J / T.
The author has learned that Jianan technology has been making constant moves recently. Just one month before Avalon a1246 was released, another new machine (Avalon a1166pro) was released. Such an intensive release of new machines is likely to seize the market by taking advantage of the opportunity of slow bull in the market after bitcoin's output halved for the third time.

1. We have our own warehouse to keep miner, and also we have our own test and repair center. So, we will provide the test video within the SN code before we send out every second hand machine and then clean the machine to make sure every machine is in good condition to run.

2. We are Offcie Chengdu, branch office is in Nanchang, so we have warehouse in some cities like Shenzhen, Nanchang,Chengdu . If you have any chance to come to China, or any your crew, mate is in China, we are happy to invite you come to our place to make some offline busniess talk.

3. We have long term cooperation with 4 International Logistics Company, which are experienced in transporting Miner. So we offer the custom service for most of region.